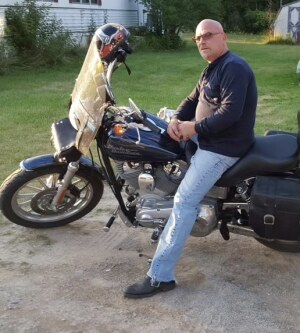 Mr. David Raymond Sanders, 52 of Hillman, Michigan died suddenly on July 22, 2021 at his home. He was born on May 27, 1969 in Kalamazoo, Michigan to David Sanders and Geraldine Elsey. He has resided in Hillman for the last 20+ years. David was an outdoorsman and enjoyed hunting, fishing, collecting rocks and polishing them with his son. He was often referred to as a workaholic and enjoyed to help others when needed. His favorite hobby was riding on his Harley Davidson motorcycle and the time he spent with his children and family. David will be deeply missed.

There will be a graveside service held in memory of David's life at the Montmorency Township Cemetery, Royston with time and date to be announced.

To send flowers to the family or plant a tree in memory of David Raymond Sanders, please visit our floral store.

You can still show your support by sending flowers directly to the family, or by planting a memorial tree in the memory of David Raymond Sanders
Share a memory
© 2021 Green Funeral Home. All Rights Reserved. Funeral Home website by CFS & TA | Terms of Use | Privacy Policy